fatpatsat
My buddy Goran and I are cycling from Vancouver, BC to St. John's, Nfld leaving June 9th - to fundraise for the Canadian Cancer Society. Check out the website at www.wheeltoheal.com or make a donation here http://www.kintera.org/faf/search/searchTeamPart.asp?ievent=222680&lis=0&kntae222680=27E2A0F53CE942369A7F0FE22D09A9B9&team=1829098

Halifax: 3 bike days from the end, and another week of updates 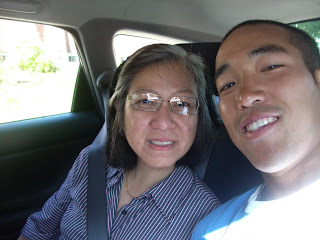 Day 61 - August 16
Sorry its been lax. keeping a blog regularly updated with 'worthwhile content' is a commitment.. but I suppose if I dont have time to write now, when will I ever? Today was great, we got up early, I was diagnosed with bronchitis, bought socks for $2 at Winners, then we went down across to Halifax (staying in Dartmouth, other side of the bridge) by ferry. Think Seabus. Walk around hit the Government House (legislature, caucus and cool library) - coffee shops, the buskers festival (average) and up to Dalhousie's soothingly archaic campus. Grabbed a pint of porter, had some manly heart-to-heart, home for 4 10 oz. steaks (that was my portion). Digging through their moving boxes for reading material, I find the Richler I wanted, Harper Lee, and Suzanne's millions of Archie comics (you're doing your PhD in what?). Auntie Siam prepared bowls of fruit for dessert followed by tea and sun chips.. our fam does it up proper.

Day 60 - August 15 (Nova Scotia... recovery of sanity)
Another day of truth. We are destined for Halifax and even I won't be able to stay surly for long (get it? its a pun, the lowest form of humor). Until then, we are still not able to remain in close proximity, civilly, as we both pound out solo sprints to Wood Islands ferries. Easy nothing hills. Waiting for the ferry we kick back, and on the Nova Scotia side Uncle David (whom I haven't seen in donkey's years - thats for you mum) and I approach each other semi-warily before deciding that yes we are each both whom we suspect the other is (wow what a word massacre that was). We stuff our bikes into the Matrix and head to Halifax to see Auntie Siam's new place. Already it feels like the end... tension lifts.

Day 59 - August 14 (reaching PEI)
New province day! These are the best. I'm still super neg recently and G + me = aggravated PMS (probably mostly my fault). So we ride for the most part far apart - still, nice that it's a bit flatter as we head towards Confederation Bridge. We meet the crazy cycling family that Alex told us about, coming the other way. Paul, from Houston (?), BC (near Smithers) is the foul-mouthed jolly dad leading his wife on a tandem, followed by (guessing) 13, 11, and 9 year old girls on fully loaded bikes. They do this every year, take a month off. The parents have obviously been riding their whole lives, who knows how these tough little kids keep up. They go the other way so we reach the gargantuan Confederation Bridge, which rises up in the distance out of the concrete like a mythical beast.

The 13km bridge has only been fully cycled once (illegally, by demonstrators, of course) - we are taken across in trailer truck with another cycling family from Michigan. Upon reaching Borden-Carleton, PEI, we lose 2 hours to the tourist trap. 30km to beautiful Victoria-by-the-sea. Steak wraps and plentiful beers later, we are told about the free showers in the public park (but I of course run out of hot water). I discover the joys of an open jar of 'Map-o-Spread' in my pannier (notice there's not even the word maple)... imagine pure sugar goo saturating all of your belongings. We hole up behind the lighthouse for the wettest night yet, my cough is pretty ridiculous these days (although almost a welcome distraction while I bike). It smells like salt, and clams, and the mosquitos gorge on our flesh.

Day 58 - August 13 (the joy of wet stinky sleep)
We leave the hole named Fredericton, aiming for Moncton - and promptly hit a convenience store from heaven: meet a wonderfully kind owner who supports us with free 4L water and use of his facilities - he has sons who have done triathlons. That helps for morale. We zoom out for 50km on 105, then get back on the T-Can and run into another cyclist. Alex from Montreal, doing the east-west route (first MTL-Victoria - incl. Whistler! - then flew back to Nova Scotia to cycle home). His bike is flimsy in the frame, he says that we're lucky to be on steady Surly Long Hauls. We have an exquisite lemon pie with him, then roll down to King's Landing for some free internet. Winnie, the tourist centre manager there, spoils us with coffee/tea/packs of hot chocolate/soup. Definitely the best ? centre ever. We hit Moncton, dinner at Sobeys and camp out beside a Hyundai dealership (idiotically, right at a highway onramp). I awake to cold, cars and whooping cough, and shout over to G asking if it's time to get up.. but it's only 245am. I suggest maybe we get going.

Day 57 - August 12 ('10x' denotes country road/old highway)
I awake in cold wet fog at 645am, and pissed that G won't stir (the usual) - eat half a jar of fake Nutella in frustration and pass out again. When I awake once again I am hit by the gut shot of regularity, of course with no facilities at hand. They open the shop early for us at 9am, the neighbour Alan showing us the route down 105. Flatter route country road but we only start at 11am. I take off, annoyed, and most of the day we ride solo. Stop at a private campground for lunch and get bad directions to the 102, ending up back on the T-Can highway 2. Hilly into Fredericton, where everything is closed on Sundays at 5pm - except tourist information, where they give you false information and false hope.

We bike around town looking for food and grating on each other until we find Harvey's. Damn good burgers. Cross a bridge leaving Fredericton and into a soccer field - thank God just 3 days left until rest... we're starting to both check out on this trip. Out of food, almost, and hopefully tm find an open store on the empty 105. At least it was good to talk to JD today. We've been doing about 160km/day lately.

Day 56 - August 11
End in sight - Tim Hortons still in French (even in Edmunston, NB). How can these franchises not take debit? Chagrin - boycott!! Walmart lunch in Grand Falls among the rolling Appalachians, which seem to stretch farther than the eye sees. We buy economy: 1.25kg potato salad and promptly overdose. Then make sandwiches with leftovers. More climbing into a spring-fed waterpark in the middle of nowhere mountain. Spring water is so good. There we meet a nice lady who works in some capacity against cancer who provides a donation.

On a passing cyclist's tip, we aside to Florenceville (McCain-town, pop. 900). Hit up Hunter Bros. Farmer's Market which is open late - owner Chip has everything in this tiny shop, from cookies to jam, fruit to homemade caramel corn pops. He regularly lets cyclists like us camp out in the back field, which features a perfectly cold, drinkable/washable pond.

Day 55 - August 10
Awake in St. Jacques, fly through the flats to Kamouraska, a bump in the prairie-like terrain. Low tide means you can walk out across the St. Lawrence to pockets of the little islands - a beached sailboat frustrates the locals. Hilly as hell into Riviere-du-Loup, reminiscient of Hope Slide (but its so long ago who am I kidding). Long gradual inclines but good fast payoffs downhill. The beer after we cross into NB is non-descript but British (redundancy).

Day 54 (leave Quebec City) - August 9
We stuff ourselves, the norm, at the hotel's continental breakfast - a perfect unity of French (pastries) and Anglo (cereal). Hit road at 1015, cycle along the ferry port encicling the old fort wall, a well populated bike path on a sunny but cool day. Across the bridge is the town of Levis (with an accent EH-GOO?) - almost 15km of 'Spanish Banks meets Route Verte' vibe, where it seems no one has to work and everyone is on wheels. By the St. Lawrence, across from the Old City, its easy to see why Quebecers want to keep this for themselves. I am sad when the path ends. We wind our way making good time (considered mid or high 20s kph) to Berthier-sur-mer, then to St. Jean Paul - a 'cultural capital' of Canada.

Along the flat road, carving and arts/crafts shops beckon: but we are told that this route 132 leads to construction (the devil!).. After detouring to La Pocatiere, we meet Sam - a French cyclist who did Tofino-Halifax last year. He suggests we hop back onto the 132. A cute cashier in the supermarket reminds me of a girl I was into (who was into girls herself) - before we are victims of an early sunset. Back on the 132 like idiots we hit the aforementioned construction, and half-lost, set up camp on a patch of grass just feet away from picturesque low tide on the river. Tm into New Brunswick, 'final stretch' mentally and likely some ugly Appalachians to cross.
Posted by fatpatsat at 5:25 AM